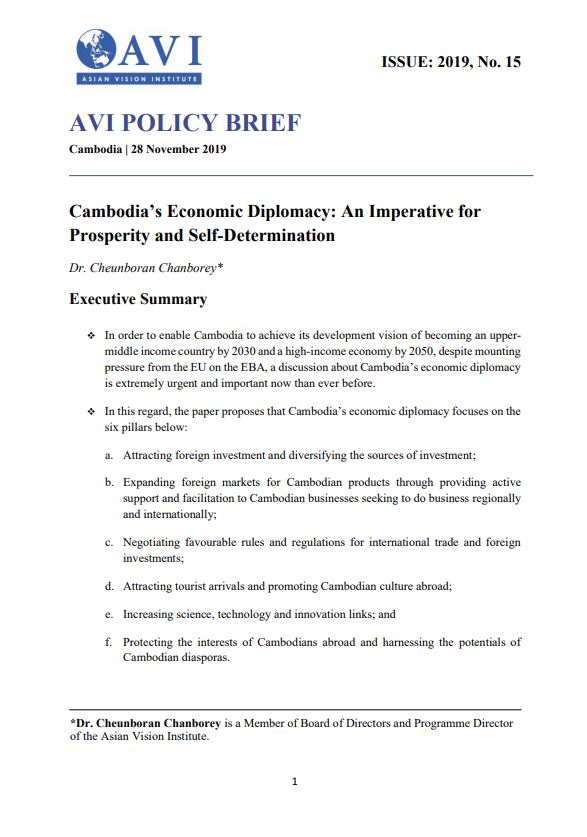 Cambodia’s Economic Diplomacy: An Imperative for Prosperity and Self-Determination

Over the last year, there has been a heating debate about the potential risks and challenges that Cambodia might face if the EU removes the preferential trade treatment to the Kingdom, everything but arms (EBA). The removal of EBA has been predicted that it would hit hard the country’s garment and footwear industrial sectors and that hundreds of thousands of Cambodian factory workers would be vulnerable to job and income losses.

While the above-mentioned assessment remains debatable, it is important for Cambodia to prepare in advance to turn the prospect of a crisis into opportunities. The EU’s use of EBA as a geopolitical tool to force Cambodia to conform to its interests can be turned into an opportunity to build a momentum for comprehensive economic reforms and foreign market diversification for Cambodia’s export and businesses, which are imperative for Cambodia to achieve its development vision of becoming an upper-middle income country by 2030 and a high income economy by 2050.

A Paradigm Shift in International Relations

For centuries, power politics and military prowess had dominated international relations. However, there has been a paradigm shift in foreign policy over the last three decades. Thanks to the increasing acceleration of globalisation and regionalism, elements of power in foreign relations have moved from political and military dimensions towards economic ones with an emphasis on economic competition, trade liberalisation, technology advancement and innovation promotion.

Nowadays, it is not naïve to argue that the true power of states, especially small and weak ones, is not based exclusively on their military capability, but also on their ability and capacity to effectively integrate themselves into the global economy. Therefore, economic diplomacy has become one of the most important projects of the foreign policy of states.

Therefore, diplomats are increasingly seen as salesmen, investment and tourism promoters, market researchers, business facilitators, and agents of globalisation given their direct involvement in the creation, development and regulation of markets and capital through trade and finance negotiations.

The Royal Government of Cambodia (RGC) has embraced economic diplomacy since the early 1990s. Cambodian leaders, especially Samdech Prime Minister Hun Sen, have initiated and given priority to Cambodia’s “Open Door” Policy as a way to integrate the country into the region and the world. As a result, the Cambodian government took concrete steps to join ASEAN. Cambodia became an ASEAN observer in 1994, and it was eventually admitted in the regional grouping as a full member on 30 April 1999. Five years later, the Kingdom joined the World Trade Organization.

Recently, Cambodia has been proactively engaging in several regional multilateral arrangements, including the ASEAN Plus Three, ASEAN-Plus Free Trade Arrangements (FTAs), including with China, and with Australia and New Zealand. It has also actively participated in other regional economic mechanisms such as Belt and Road Initiative (BRI), Regional Comprehensive Economic Partnership (RCEP), as well as sub-regional cooperation frameworks, including the Greater Mekong Subregion (GMS) and Mekong-Lancang Cooperation (MLC), Ayeyawady-Chao Phraya-Mekong Economic Cooperation Strategy (ACMECS), and CLV (Cambodia, Laos and Vietnam) trilateral cooperation.

Lately, Cambodian leaders, especially Prime Minister Hun Sen and Deputy Prime Minister and Minister of Foreign Affairs and International Cooperation Prak Sokhonn, have repeatedly emphasised the importance of economic diplomacy. They have advised Cambodian diplomats to serve not only as political agents but also as economists, business facilitators as well as promoters of culture and tourism of the Kingdom.

Having said that, not any concept note or policy paper on Cambodia’s economic diplomacy has been developed. In order to implement the policy effectively, clear guidelines and concrete actions are needed so that Cambodian diplomats, particularly those who are posted at overseas Cambodian diplomatic missions, can fully comprehend and execute the policy. As a result, not many concrete actions have been taken to advance Cambodia’s economic diplomacy perhaps due to the absence of clear foreign policy guidelines and the lack of financial and human resources of the Cambodian diplomatic missions abroad.

Cambodia is located in the most economically dynamic region of the world, Asia. It is widely agreed that the 21st century is the Asian Century and that the global power has shifted to Asia. With this geo-economic dividend, opportunities for Cambodia are enormous if the country has the right policies and concrete actions and resources to execute the policies. Therefore, Cambodia needs to further harness its potentials, through the smart and effective execution of its economic diplomacy. Cambodia’s economic diplomacy should focus on six pillars as the following:

First, attracting foreign investment and diversifying the sources of investment must be the first pillar of Cambodia’s economic diplomacy. Overseas Cambodian diplomatic missions should take proactive marketing strategies to introduce the investment opportunities in Cambodia to the outside world. There is a need to enhance Cambodia’s international reputation as a destination for foreign investment, especially in agribusiness and food processing industries, physical infrastructure including tourism infrastructure, and technology and innovation.

Second, Cambodia’s foreign service should further commit to expanding foreign markets for Cambodian products through providing active support and facilitation to Cambodian businesses seeking to do business regionally and internationally by: (a) cooperating with other relevant ministries and agencies in order to provide market intelligence and contacts to Cambodian entrepreneurs interested to access foreign markets; (b) arranging meetings with business representatives to identify productive ways to provide support; (c) organising economic events (conferences, workshops, forums) and/or supporting other government agencies to hold similar events; (c) enhancing the Cambodian economic presence abroad; and (d) facilitating the access to foreign markets and the expansion of Cambodian companies already established abroad.

Third, negotiating favourable rules and regulations for international trade and foreign investments is the important task for Cambodia’s economic diplomacy in order to advance the interests of Cambodian businesses in trade and investment. Cambodia needs to be more proactive in negotiating free trade arrangements/agreements (FTAs), both bilaterally and multilaterally. It is worth noting that while Cambodia has been part of regional multilateral trading arrangements, including ASEAN and ASEAN Plus mechanisms as mentioned earlier, the Kingdom has yet to sign any bilateral FTA. Perhaps, Cambodia should consider proposing bilateral FTAs with countries that have complementary economic structure.

Fourth, there is a need to be further committed to attracting tourist arrivals and promoting Cambodian culture abroad in order to promote Cambodian reputation as an outstanding

destination to visit. Cambodia’s tourist attraction should not all about Angkor Wat and the many ancient temples dotting the country’s landscape. It should also about the natural beauty, cultural richness, friendly and hospitable people, vibrant communities, and availability of modern housing for low prices. Therefore, Cambodian diplomatic missions need to take more efforts in marketing to enhance the visibility of Cambodian culture, traditions, cuisine, and modernity on the world stage.

Fifth, Cambodia’s foreign service needs to play an increasingly active role in increasing science, technology and innovation links, through (a) identifying offshore sources of support and finance for the advancement of technological innovation in Cambodia and (b) facilitating joint activities and cooperation between foreign agencies and Cambodian relevant institutions to promote science, technology, innovation and digital infrastructure development.

Finally, economic diplomacy is also about protecting the interests of Cambodians abroad and harnessing the potentials of Cambodian diasporas. While it is crucial to improve Cambodia’s consular services and assistance, there is also a need to help Cambodians abroad to better understand consular roles and assistance, which they can seek to protect their interests. Moreover, Cambodia has large diaspora communities in several countries namely the US, Australia and France. Cambodia can tap into the potentials of those diaspora communities to enhance the country’s economic diplomacy in terms of fostering knowledge transfer, promoting Khmer national identity abroad, and linking them to the development in the Kingdom. To this end, there is a need to promote their sense of close attachment to the motherland through increased contacts and joint activities.

To achieve the above-mentioned objectives, the Cambodian Ministry of Foreign Affairs and International Cooperation should, first and foremost, create an economic diplomacy team or unit in order to work closely with other line ministries and agencies.

Second, a monthly bulletin on political, economic, social, and cultural aspects of Cambodia should be regularly published. All Cambodian diplomatic missions should be tasked to contribute to and disseminate the bulletins, which also contain an additional section on Cambodia’s bilateral relations with their respective host countries and regions.

Third, Cambodia’s diplomatic missions should organise and engage in annual food fairs, tourism fairs, cultural shows, and trade exhibitions by collaborating with relevant ministries and agencies as well as Cambodian communities in their host countries in order to promote Cambodian cuisine, culture, tradition, tourism, and trade.

Last but not least, people are at the heart of diplomacy and the key to a country’s success. In this respect, there is a need to continue to attract the most highly qualified and competent to work in the Cambodian Foreign Service, through institutionalising mechanisms of providing incentives, motivation, and equal opportunity to all officials in order to enable them to maximise the use of their skills and potentials to contribute to the enhancement of Cambodian domestic and international potentials.

The EU’s threat to withdraw the EBA from Cambodia as a response to the so-called “death of democracy” in the Kingdom entails the regional grouping’s double-standard foreign policy approach towards Southeast Asia. There is a growing perception in Cambodia that the EU has manipulated the promotion of democratic values to disguise its ambition to advance its geo- economic and strategic interests in Asia. However, one needs to come to term that international relations are not mainly about good will, friendship, or personal affection, but about a country’s practical relevance to the region and beyond in economy, diplomacy and geo-politics.

For small states like Cambodia, the limited ability to capitalise on globalisation and regionalisation is more a reflection of foreign policy passivity and inadequate innovative ideas than the deterministic structure of their smallness. Cambodia needs to further invest in the promotion of economic and cultural diplomacy in order to internationalise a positive and new image of Cambodia. The outdated but still dominant views of Cambodia are a country of civil war, landmines, poverty and insecurity, and cheap and abused mass labour in garment and footwear factories. These images do not serve the interests of Cambodia’s economic diplomacy and do not really reflect Cambodia’s current development potentials. Cambodia has many opportunities to offer and plenty of achievements and invaluable lessons to share with the rest of the world. Cambodia cannot afford to get trapped forever in the rigid mindset of categorisation as a least developed country, whose survival depends mainly on receiving preferential trade arrangement schemes such as the EBA, if it is really serious about protecting and promoting its sovereignty and self-determination. Therefore, Cambodian diplomats need to be more proactive and better equipped to promote their country’s interests and relevance to the region and the world with a number of concrete actions.