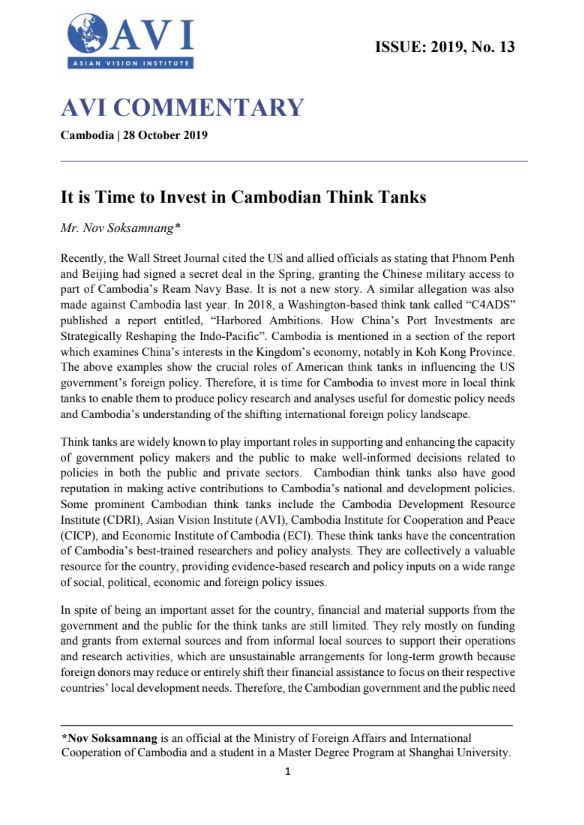 It is Time to Invest in Cambodian Think Tanks

Recently, the Wall Street Journal cited the US and allied officials as stating that Phnom Penh and Beijing had signed a secret deal in the Spring, granting the Chinese military access to part of Cambodia’s Ream Navy Base. It is not a new story. A similar allegation was also made against Cambodia last year. In 2018, a Washington-based think tank called “C4ADS” published a report entitled, “Harbored Ambitions. How China’s Port Investments are Strategically Reshaping the Indo-Pacific”. Cambodia is mentioned in a section of the report which examines China’s interests in the Kingdom’s economy, notably in Koh Kong Province. The above examples show the crucial roles of American think tanks in influencing the US government’s foreign policy. Therefore, it is time for Cambodia to invest more in local think tanks to enable them to produce policy research and analyses useful for domestic policy needs and Cambodia’s understanding of the shifting international foreign policy landscape.

Think tanks are widely known to play important roles in supporting and enhancing the capacity of government policy makers and the public to make well-informed decisions related to policies in both the public and private sectors. Cambodian think tanks also have good reputation in making active contributions to Cambodia’s national and development policies. Some prominent Cambodian think tanks include the Cambodia Development Resource Institute (CDRI), Asian Vision Institute (AVI), Cambodia Institute for Cooperation and Peace (CICP), and Economic Institute of Cambodia (ECI). These think tanks have the concentration of Cambodia’s best-trained researchers and policy analysts. They are collectively a valuable resource for the country, providing evidence-based research and policy inputs on a wide range of social, political, economic and foreign policy issues.

In spite of being an important asset for the country, financial and material supports from the government and the public for the think tanks are still limited. They rely mostly on funding and grants from external sources and from informal local sources to support their operations and research activities, which are unsustainable arrangements for long-term growth because foreign donors may reduce or entirely shift their financial assistance to focus on their respective countries’ local development needs. Therefore, the Cambodian government and the public need​ to invest as much in local think tanks as they do in other areas of priorities for the long-term sustainable development of Cambodia.

In this modern era, Cambodia needs professional analysis and reliable policy research to help policy makers and the public to make effective and accurate policies and decisions. Therefore, making greater investment in supporting research productivity is instrumental to achieving those objectives. While Cambodian universities and higher educational institutions focus their businesses almost entirely on teaching with little attention on research production, research activities and outputs in the country become mainly the work of think tanks. Therefore, supporting local think tanks are crucial for boosting research outputs and enhancing knowledge, useful for both policy makers and the general public.

Through collaborations and networking activities, Cambodian think tanks can pool their resources together, expand their scope of activities, and increase their collective impacts on policies. For example, they can join together in organising conferences, seminars, public lectures, and roundtable discussions to disseminate their research findings. Several local think tanks have recently signed Memorandum of Understanding (MOU) with each other to promote cooperation on research and capacity building. For instance, the Asian Vision Institute (AVI) has signed two separate MOUs with CDRI and National Institute of Diplomacy and International Relation (NIDIR) respectively. The MOUs signing illustrates their striving for greater impact in sharing their innovative ideas for policies and progress of Cambodia.

Cambodian think tanks have also contributed to policy recommendations at the regional level. For example, CDRI has, during the last decade, influenced significantly on regional policy through collaborative works with the ADB–Asian Think Tanks Network (ATTN), IDRC’s Think Tank Initiative, and the Network of East Asian Think-Tanks (NEAT). CDRI is one of the founders of the Silk Road Think Tank Network (SiLKS). Recently, the Executive Director of CDRI has been invited to serve as international advisor to the Chinese Institute of International Studies which is administered by the Ministry of Foreign Affairs of the People’s Republic of China. CDRI also ranks among the top 100 Think Tanks (among 6800 think tanks) of “The Global Go To Think Tank Index”.

Some Cambodian think tanks are also members of regional think tank networks. For example, the Global Center for Mekong Studies (GCMS) is a consortium of regional think tanks from Cambodia, China, Laos, Myanmar, Thailand, and Vietnam. The consortium aims to provide policy recommendations to the Mekong-Lancang countries. Another example of a regional think tanks consortium is the Economic Research Institute for ASEAN and East Asia (ERIA), which was established in 2008 by a formal agreement among the leaders of 16 countries. ERIA undertakes research to provide policy recommendations to support regional economic integration. Thus, Cambodian think tanks have made contributions and offered useful perspectives to various policies and development sectors not only in Cambodia, but also in the wider region.

In conclusion, supporting the work of local think tanks will offer substantial benefits to policy makers, leaders, development partners, relevant stakeholders and the general public in making well-informed policies and decisions, which will lead to better governance and prosperity of Cambodia. Investing in local think tanks also means supporting a long-term mission to nurture a community of young dynamic Cambodian thinkers, who will offer innovative policy solutions to ensure the sustainability of Cambodia’s peace and progress into the far future. 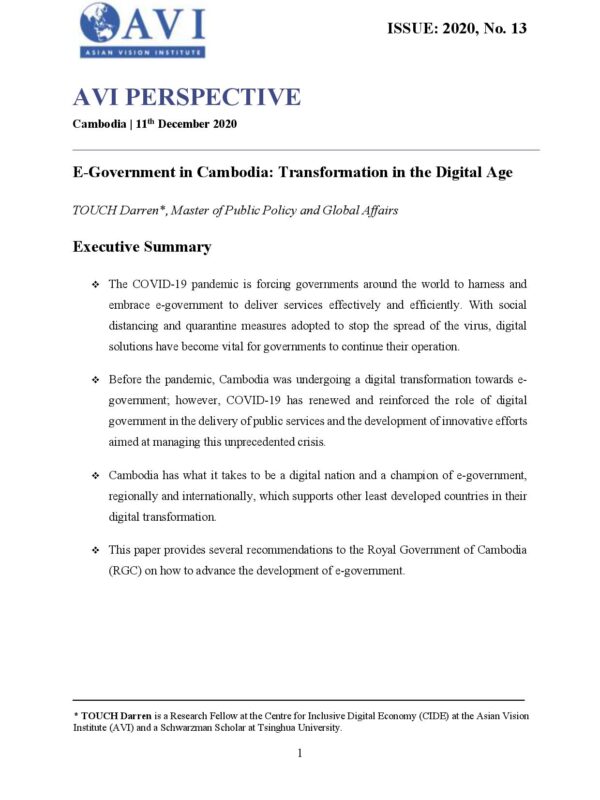 AVI PERSPECTIVE ISSUE: 2020, No. 13 | E-Government in Cambodia: Transformation in the Digital Age

AVI PERSPECTIVE ISSUE: 2020, No. 13 | E-Government in Cambodia: Transformation in the Digital Age 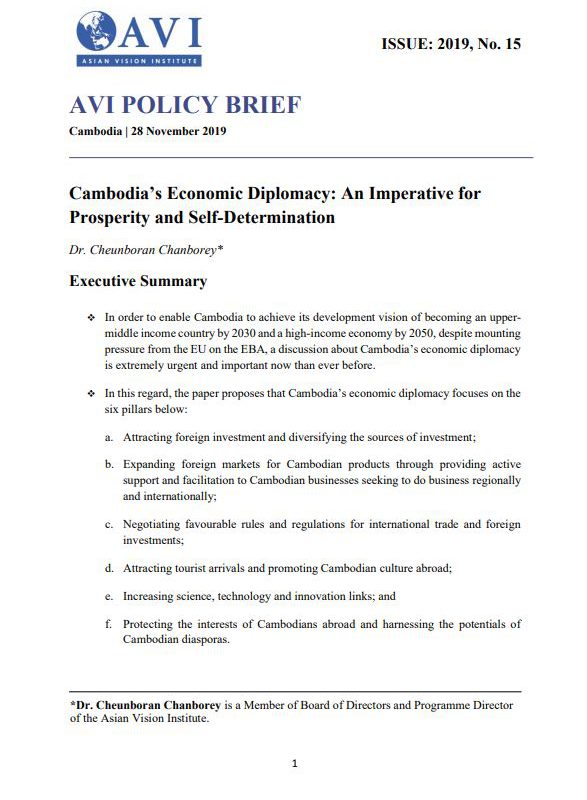 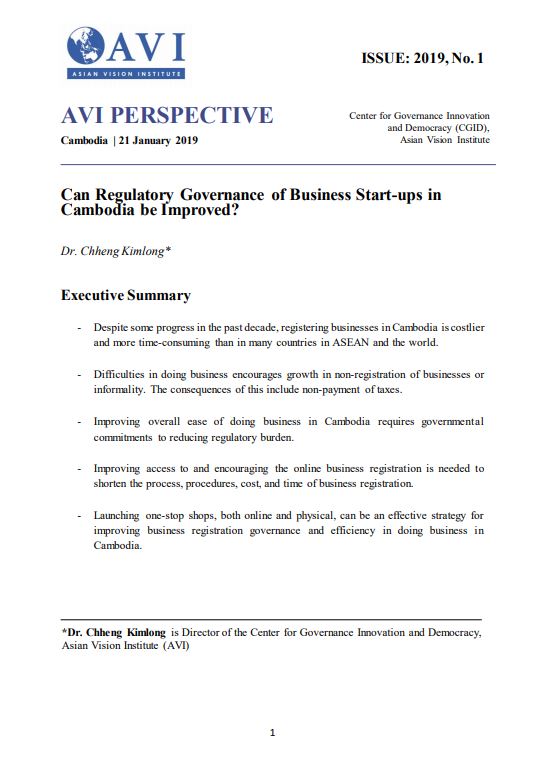 AVI PERSPECTIVE ISSUE: 2019, No. 1 | Can Regulatory Governance of Business Start-ups in Cambodia be Improved?

AVI PERSPECTIVE ISSUE: 2019, No. 1 | Can Regulatory Governance of Business Start-ups in Cambodia be Improved?