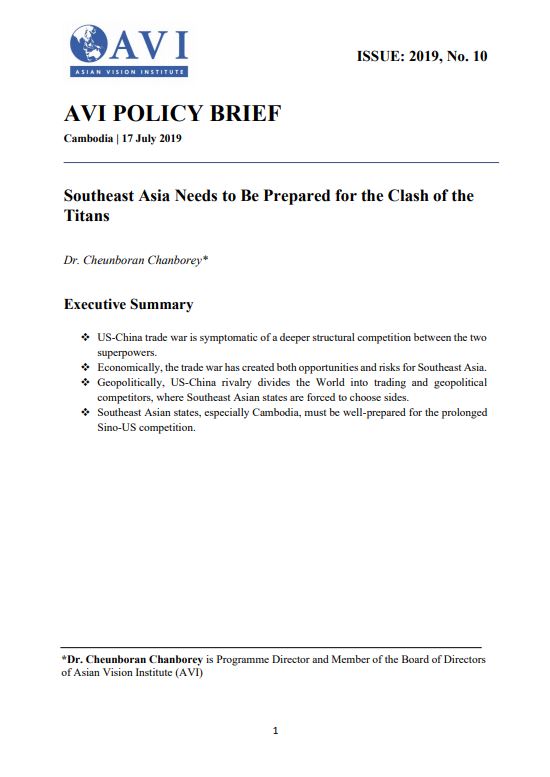 The ongoing US-China trade war has further complicated the relations between the World’s biggest economies, which are the most important and thus the most consequential bilateral ties of our time. The trade war poses risks to the global economy and security.

The prolonged conflict could undermine the investment and growth prospects in East and Southeast Asia. On top of that, it could worsen the geopolitical complexity of the region. This article will examine the US-China trade war and its implications on Southeast Asian nations, focusing on Cambodia. Furthermore, it will propose suitable policy recommendations.

Prior to President Donald Trump’s election, the US suffered from negative trade deals with international counterparts, specifically China. President Trump has always emphasized China’s unfair competition strategy. According to the President, China has been “raping the US” and responsible for the “greatest theft in the history of the World.”

As one of President Trump’s first actions in office, he launched an investigation on Chinese trade policies. In 2018, the US government imposed three rounds of tariffs on more than USD250 billion worth of Chinese goods, with duties of up to 25%, covering a wide range of products from handbags to railway equipment. China has hit back by imposing tariffs ranging from 5% to 25% on USD110 billion of US products.

The US began planning an additional USD300 billion of Chinese goods, but at the G20 in Japan in June, President Trump called it off and continued to negotiate with Beijing “for the time being.”

There are four main reasons that the Trump administration has used to justify its trade war against China. First, the US has lost its position as a manufacturing nation due to the so-called China’s unfair competition. In fact, the US’s share of global manufacturing outputs has declined from 29% in the early 1980s to 18.1% in 2016. In contrast, China’s manufacturing production, which was negligible in 1980, surpassed that of the US in 2008 and continued to increase to around 26% of the world’s manufacturing outputs in 2014.

Secondly, the US has accused China for the loss of jobs in their manufacturing industry. Chinese corporations have taken advantage of America’s open market, while China has kept its own market closed to American products. The number of employees in the manufacturing industry in the US decreased from 19.5 million in 1979 to 12.7 million 2018. In a study by David Autor and his colleagues, a quarter of all manufacturing jobs lost in the US between 1990 and 2007 were primarily due to the deluge of Chinese imports.

Thirdly, the trade balance is one-sided in China’s favor. President Trump wants fair trade, instead of free trade. In 2017, the deficit on the US trade balance reached USD375 billion, equal to 2% of US GDP. China as the US’s largest trading partner, is the biggest winner of the US’s trade deficit.

Fourthly, China has been accused of forcing foreign manufacturers to share their technology with local partners, who then reverse-engineered the same products to compete against their foreign partners.

These arguments sound familiar to when the Americans built a similar unfair trade narrative in the 1980s vis-à-vis its then biggest trading partner, Japan. From a broader perspective, the trade dispute is symptomatic of a deeper structural problem between the global superpowers, which has deteriorated both the geopolitical dynamics and industrial policies from all sides.

The past goodwill from the US towards China that had been developed since Richard Nixon’s visit in Beijing in 1972 is rapidly eroding. In the latest Department of Defense Indo-Pacific Strategy Report, the US labeled China as a revisionist power.

Anti-China sentiment has gained momentum across party lines and will endure after Trump leaves the White House. American hawks consider that the best way to preserve their dwindling economic and technological domination is to reduce trade links with China and restrict its access to US technology and education.

Beijing believes Washington is bent on containing China in order to deny China its rightful place and to prolong American declining power-. Chinese leaders want to lessen their trade exposure and wean themselves off their technological and financial dependence on the US.

In 2015, the Chinese government launched “Made in China 2025,” which is a state-led industrial policy that will allow China to surpass Western technological prowess in high-tech manufacturing. Therefore, it can be argued that the trade war is part of the long-term and comprehensive US-China rivalry.

For ASEAN member states, including Cambodia, it is of paramount importance to have a clear vision of the impacts of the ongoing trade war on their economies and societies as well as their regional institutions, especially ASEAN.

Economically, the impacts are two-fold. On one hand, the spillover effects could hit the region as final products marketed in the US are “Made in China” through components imported from other Asian countries, especially in Southeast Asia. Asia’s intra-regional trade accounts for 57.3% of total trade relations, in which a considerable part of the exchanges are components going to China. Moreover, the region’s long-term growth might be affected due to the looming economic prospect of the two powerhouses, as a result of the tit-for-tat trade war.

On the other hand, the trade war can benefit Southeast Asia for two main reasons. Firstly, there are more opportunities for Southeast Asian products to be exported to the US market, because they would be more competitive compared to Chinese products.

Southeast Asian nations could also expand their shares in the Chinese market, due to the barriers on US products, as retaliation. The Chinese list of retaliations mainly includes agriculture and resources where Southeast Asia offers alternatives to American products.

Secondly, the prospect of East Asia moving towards a regional self-sustaining economic entity is promising. The trade war offers opportunities to nations in East Asia to concentrate on regional production and supply chains. The possibility of shifting the assembling of goods from China to Southeast Asian nations should not be ruled out.

In fact, Chinese companies have recently accelerated their investment in Southeast Asia to address American tariffs. For example, Chinese foreign direct investment (FDI) in Vietnam based on approved projects, increased five-fold to USD1.56 billion, during the first half of 2019. The January to April figure alone surpassed the full year of 2018. Similarly, Thailand has also seen an upswing in Chinese capital inflows. From January to March 2019, approved FDI from China to Cambodia doubled to USD933 million.

Geopolitically, however, the prospect for the region is uncertain and dangerous. In the escalating competition for technological advantage and geopolitical supremacy, the two titans will coerce other states to take sides. There is a possibility that the world will be divided into two trading and geopolitical competitors, where Southeast Asian nations are forced to choose sides. During the recent ASEAN Summit in Bangkok, a top US Defense Department official told ASEAN leaders to choose between China and the US.

Therefore, it is increasingly clear that an intensifying Sino-US competition can make or break ASEAN. ASEAN’s unity and centrality might be at risk, due to the consequences of the competition.

In this context, Southeast Asian nations need to capitalize on the spillover benefits from the US-China trade war, to speed up the ASEAN community building process. To become a single market and an integrated regional production base, ASEAN needs to speed up its connectivity projects, promote digital integration, and improve its intra-regional trade and supply chains.

Beyond the ASEAN Community, ASEAN should push for the conclusion of the Regional Comprehensive Economic Partnership (RCEP) agreement and embark on Asia-Pacific trade cooperation. If concluded, RCEP will be the largest trading block, which accounts for 32% of global GDP, 28% of global trade and a total population of 3.5 billion.

However, the prospect for the conclusion of RCEP is rather dim, due to preoccupations of some negotiating parties. ASEAN should propose the ASEAN-Plus mechanism to move first, while keeping the door open for those that are not ready. Essentially, the adoption of RCEP should focus on economic integration, rather than competition with other regional initiatives.

Within the context of increasing geopolitical rivalry, it is more crucial for ASEAN member states to stay united and collectively address structural risks and challenges. Together, ASEAN can ward off adverse impacts from this great rivalry – especially by upholding its neutrality and implementing a collective hedging strategy to mitigate mounting geopolitical risks. Collectively, ASEAN can build a transparent, inclusive, and rule-based international order to ensure regional integration and community building.

For Cambodia, the trade war is generating both challenges and opportunities. The key challenge is how the Kingdom can mitigate risks and seize opportunities. Institutional reforms, business productivity, infrastructure investment, technological innovation, and trade logistics need to be improved.

On the foreign policy front, it is even more challenging. As a small state, Cambodia wishes to be a friend to all and an enemy to none. While Cambodia-China ties have been strengthened, Cambodia-US ties are facing significant trust deficit. To be fair, it is hard for Cambodia to improve its relations with the US, if Washington remains locked in its presumption that Cambodia is completely leaning towards China at its expense. Therefore, there is a need for Phnom Penh and Washington to engage in good-faith dialogues, through both tracks 1 and 2 in order to promote mutual understanding and strategic trust.

Along that line, Cambodian foreign policymakers and scholars needs to be more proactive and innovative to promote trust with their American counterparts, and Washington needs to be open-minded to listen and understand Cambodia without any presumption and reservations.