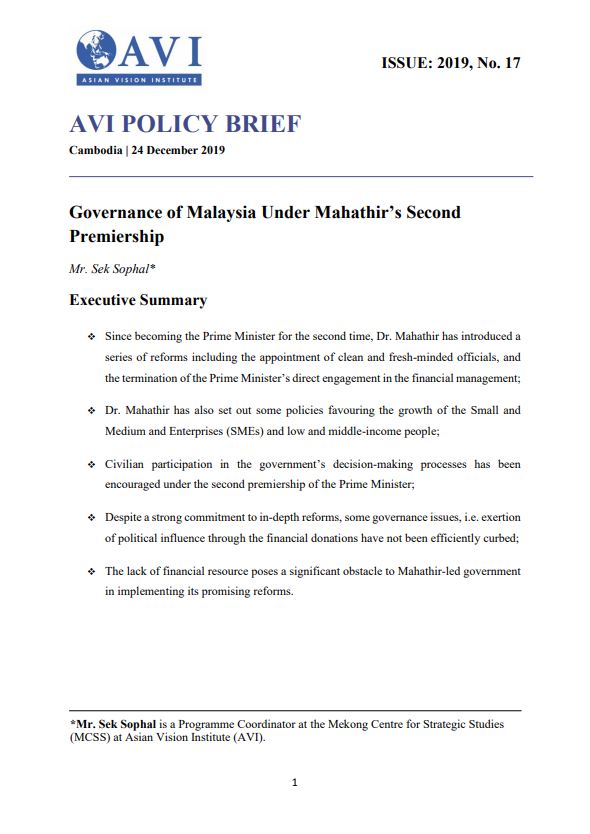 The 14th general election in May 2018 marked two historical turning points of contemporary Malaysian politics. First, Barisan Nasional coalition (BN), which had ruled Malaysia for 61 years since its independence in 1957 lost their majority to Pakatan Harapan coalition (PH). Second, former Prime Minister Mahathir Mohamad, a former mentor of the ousted Prime Minister Najib Razak, returned to power for the second time. The downfall of Najib’s administration was not by accident, but clearly indicated the enthusiasm of Malaysian people for a new political change. To Malaysians, it is time to reinvigorate Malaysia’s glorious era of rapid economic development and strong regional political leadership during the 1980s and 1990s, and they looked at Mahathir with the expectation of promising changes. Yet, Mahathir pledged to stay in power for only two years. With a long list of promises during the election campaign, it is not clear how far his new government can go. The return to power by Mahathir, however, will change the future of Malaysia.

What has been achieved?

Not long after taking office, the new government has launched a series of reforms. First, Mahathir terminated direct involvement in finance management by Prime Minister. Unlike Najib, who by then served as both Prime Minister and Minister of Finance at the same time, Mahathir appointed Lim Guan Eng, a former chief of minister of Malaysia’ Penang state and secretary general of the center-left Democratic Action Party (DAP), as Minister of Finance. Although Najib has gone, his political consequences remain. A number of high-profile corruption scandals, including Najib’s 1MDB scandal are still under investigation. Appointing a fresh-minded person to deal with these issues is important not only for Mahathir’s personal political credibility, but also for his solid commitment to corruption eradication and transparency promotion. As Abdul Rahman, an Emeritus Professor in Sociology at the National University of Malaysia, observed “these measures have been popular, and that there’s also widespread public support for a full investigation into the entrenched corruption that has dragged Malaysia’s economy for decades.”

Second, in addition to structural reforms, the government has made some policy adjustments to promote the country’s Small and Medium Enterprises (SMEs) and increase domestic consumptions. The rapid abolition of Good and Service Tax (GST), for instance, highlighted a major achievement of policy adjustments by Mahathir-led government. The issue of rising costs of living has been one of the most critical challenges facing Malaysians for years. The introduction of 6% GST in 2015 by the government of Najib made the difficult living conditions even worse. During the campaign, the PH coalition promised a complete elimination of GST within 100 days after taking office. By mid-August 2018, the government announced complete abolition of GST.

Third, another important issue the government promised to solve in the run-up to May election was to increase a number of affordable housing for purchase and rental. Technically, the project is time-consuming and might not be visible in the short run. However, there have been positive signs that the government is working on it. According to Projek Pantau Report Card No. 2 published by the Institute for Democracy and Economic Affairs (IDEAS), a Malaysia-based nonprofit research institute, “the recently-launched National Housing Policy indicates that the Government will play an active role in the market.” However, the government, as the report suggested, should do more to make the affordable housing project more suitable for low- income people. Removing regulatory obstacles, setting specific time frames for contractors to complete the projects and reducing direct involvement of the government agencies in construction plans are all useful mechanisms to speed up the projects and promote transparency.

Fourth, the new government promotes diverse political participation through dialogues and consultation with civilian stakeholders. In some cases, the dialogues and consultation are possible even in the context of national security policy. One of the most visible cases of the diverse participation and cooperation between the Malaysian government and civilian stakeholders is the process of drafting Malaysia’s first ever Defence White Paper. According Ivy Kwek, a Special Functions Officer to the Deputy Minister of Defence, Malaysia has been working on the paper since the early days of the new government. The paper, however, is still in the pipeline. Even though the Defence White Paper is under the purview of the Ministry of Defence, the draft paper, according to Murray Hunter, a consultant in Southeast Asia, “is being developed in consultation with civil servants, military personnel, think tanks, academics, industry representatives, and NGOs.” This kind of engagement did not exist in the previous governments of Malaysia.

Even though the new government of Malaysia has made several reforms, the political landscape of Malaysia has not witnessed major changes yet. The decision and policy making processes remain top-down approach. Parliamentary has yet to make any significant contribution. During the election campaign, the PH coalition made several commitments to reforms, including the introduction of ‘Political Financing Control Act’ within its first year of administration. The key principles of the new legislation, according to the PH’s election manifesto, is to examine the annual state funding for political parties, put an end to unverified sources of financial donations and outlaw the financial donations by Government Linked Companies (GLCs) to political parties.

However, it is unclear as to whether the new legislation will be introduced soon. By late July 2019, the PH coalition “has not yet sought consultation with civil society or members of parliament on the matter.” “Failure to reform political financing,” as Tricia Yeoh, a PhD candidate at the University of Nottingham Malaysia and a Fellow at IDEAS, argues “puts Pakatan [the PH coalition] at risk of succumbing to the same political patronage that afflicted UMNO.” By June 2019, only 30% of the PH coalition government’s promises were, according to IDEAS, fulfilled.

Besides the political financing reform, some new policies initiated by the PH coalition government might not be implementable due to the lack of resources. The Defence White Paper might be, for instance, more symbolic than realistic military plan due to the steady decline of defence budget. According to the Stockholm International Peace Research Institute (SIPRI), an independent international institute dedicated to research into conflicts, armaments, arms control and disarmament, the Malaysian annual defence budget has gradually declined for the last 10 years, from US$ 4.16 billion in 2008 to only US$ 3.4 billion in 2018.

Strategically, the defence budget size reflects how potentially the government can develop its military capabilities. With continuous decline in the defence budget, it is highly unlikely that Malaysia will be able to afford new procurements of military hardware to boost its defence capabilities. As the International Institute for Strategic Studies (IISS), a London-based global think tank working on military, geopolitical and geo-economic development, pointed out in its annual report of The Military Balance 2019, “the 2013 armed intrusion at Lahad Datu in Sabah state, the aftermath of the March 2014 disappearance of Malaysia Airline flight MH370 and Chinese naval intrusions into Malaysia’s EEZ in 2015–16 revealed capability shortcomings, particularly in air and maritime surveillance.” As such, it seems that Malaysia’s Defence White Paper might not be realistic.

The return to power by Mahathir vindicates how extremely the people of Malaysia are fed up with the long-standing corruption and incompetent government led by Najib and want changes. Mahathir made his way back to ruling Malaysia with his promising political credibility and economic legacies. While the PH coalition government of Mahathir remains committed to reforms, there are still more things to do. Mahathir, however, promised to stay in power for only two years. With the long list of reform agendas, particularly the institutional and legal reforms, which are complicated and time-consuming, Mahathir is working against the clock. Even though Mahathir’s leadership and his political popularity remain strong, the window to reforms is closing given the limited timeframe of his premiership. The PH coalition government might be unlikely able to meet all of its promises made during the election campaign.