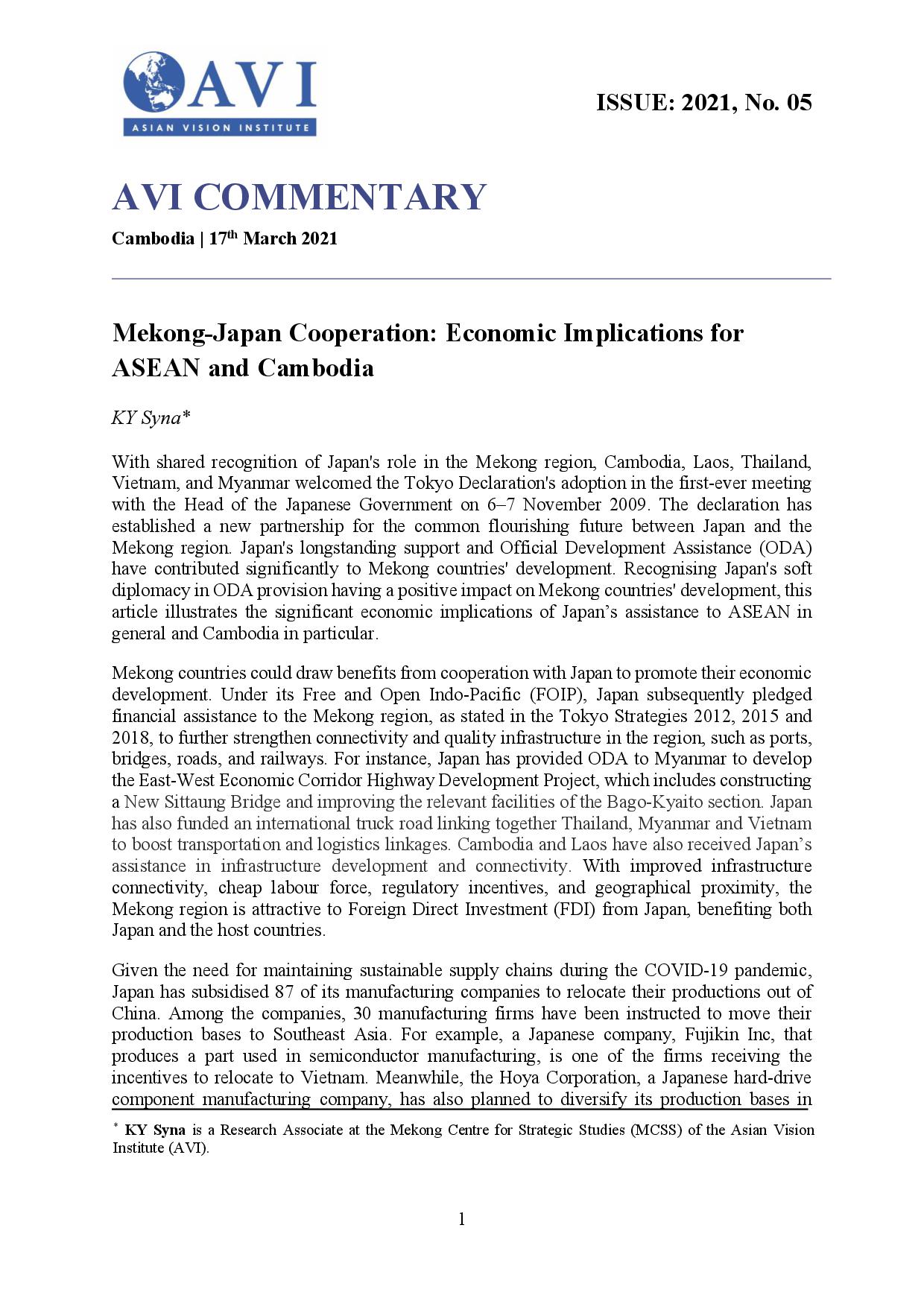 With shared recognition of Japan’s role in the Mekong region, Cambodia, Laos, Thailand, Vietnam, and Myanmar welcomed the Tokyo Declaration’s adoption in the first-ever meeting with the Head of the Japanese Government on 6–7 November 2009. The declaration has established a new partnership for the common flourishing future between Japan and the Mekong region. Japan’s longstanding support and Official Development Assistance (ODA) have contributed significantly to Mekong countries’ development. Recognising Japan’s soft diplomacy in ODA provision having a positive impact on Mekong countries’ development, this article illustrates the significant economic implications of Japan’s assistance to ASEAN in general and Cambodia in particular.

Mekong countries could draw benefits from cooperation with Japan to promote their economic development. Under its Free and Open Indo-Pacific (FOIP), Japan subsequently pledged financial assistance to the Mekong region, as stated in the Tokyo Strategies 2012, 2015 and 2018, to further strengthen connectivity and quality infrastructure in the region, such as ports, bridges, roads, and railways. For instance, Japan has provided ODA to Myanmar to develop the East-West Economic Corridor Highway Development Project, which includes constructing a New Sittaung Bridge and improving the relevant facilities of the Bago-Kyaito section. Japan has also funded an international truck road linking together Thailand, Myanmar and Vietnam to boost transportation and logistics linkages. Cambodia and Laos have also received Japan’s assistance in infrastructure development and connectivity. With improved infrastructure connectivity, cheap labour force, regulatory incentives, and geographical proximity, the Mekong region is attractive to Foreign Direct Investment (FDI) from Japan, benefiting both Japan and the host countries.

Given the need for maintaining sustainable supply chains during the COVID-19 pandemic, Japan has subsidised 87 of its manufacturing companies to relocate their productions out of China. Among the companies, 30 manufacturing firms have been instructed to move their production bases to Southeast Asia. For example, a Japanese company, Fujikin Inc, that produces a part used in semiconductor manufacturing, is one of the firms receiving the incentives to relocate to Vietnam. Meanwhile, the Hoya Corporation, a Japanese hard-drive component manufacturing company, has also planned to diversify its production bases in Vietnam and Laos. In this regard, Mekong countries will benefit significantly in terms of increased human capital, technical skills and innovation, further contributing to the region’s economic development.

Mekong-Japan Cooperation is an essential complementarity of other regional development plans for ASEAN. The economic gap among ASEAN members is a great challenge in realising the ASEAN Community 2025. The economic inequality between developing countries, notably the CLMV, and high-income countries, specifically Singapore, remains a setback in realising the ASEAN plans in narrowing the income inequality gap between ASEAN’s rich and poor members. While the four Mekong countries’ combined Gross Domestic Product (GDP) stood at USD 757 billion, Singapore’s GDP alone amounted to USD 341.863 billion. Thus, there is a need to address the disparity among the member states.

In addition to narrowing the income gap, the Mekong-Japan Cooperation helps address other gaps in infrastructure, human resource and institutional capacity, which Mekong Countries, particularly CLMV, are lagging behind ASEAN’s affluent nations. Under its commitment to boosting the links of Southern Economic Corridor and East-West Economic Corridor, Japan has provided technical assistance and loans to several projects in the Mekong region, including the National Road 6 improvement project in Cambodia, the Laem Chabang Port project in Thailand, the Yangon Port in Myanmar, and the North-South Expressway Construction Project in Vietnam, just to name a few.

Furthermore, Japanese experts providing technical supports of the region’s projects share skills and knowledge, helping Mekong countries improve their human resource and institutional capacity. CLMV are thus in a better position to attract FDI and enhance trading activities with the region and the world. Hence, Japan’s assistance under the Mekong-Japan Cooperation framework helps Mekong countries become more competitive and integrated into the regional and global economy.

As a country in the Mekong region, Cambodia can obtain considerable benefits from the Mekong-Japan Cooperation. In terms of economic development, Cambodia reaffirms the decision to promote the Connected Industries and welcome countries outside the region to join in the supply chains of Mekong countries. Cambodia has joined in promoting the investment in manufacturing and service, SMEs, innovative start-ups, and the development of Special Economic Zones (SEZs).

Drawing from the cooperation, Cambodia can gain more FDI, particularly as Japan intends to diversify its supply chains after its global supply chains have been affected by the Covid-19 pandemic. In this sense, the cooperation will help create more employment opportunities and skilled workers in Cambodia. With the abundance of a young population, Cambodia is an attractive place for FDI from Japan. Consequently, the Kingdom can broaden and diversify its economic base while reducing its economic vulnerability due to the heavy dependence on a few trading partners. The partial withdrawal of the EBA by the European Union in August 2020 is a lesson learnt for Cambodia.

Moreover, Japan’s assistance to Cambodia aligns well with the Kingdom’s national development goals outlined in the Rectangular Strategy Phase IV, precisely the ambition to elevate Cambodia to an upper-middle-income country by 2030 and a high-income nation by 2050. The government considers increasing FDI growth and business activities as crucial factors in maintaining the country’s growth momentum. And Japanese assistance helps Cambodia realise its economic potential.