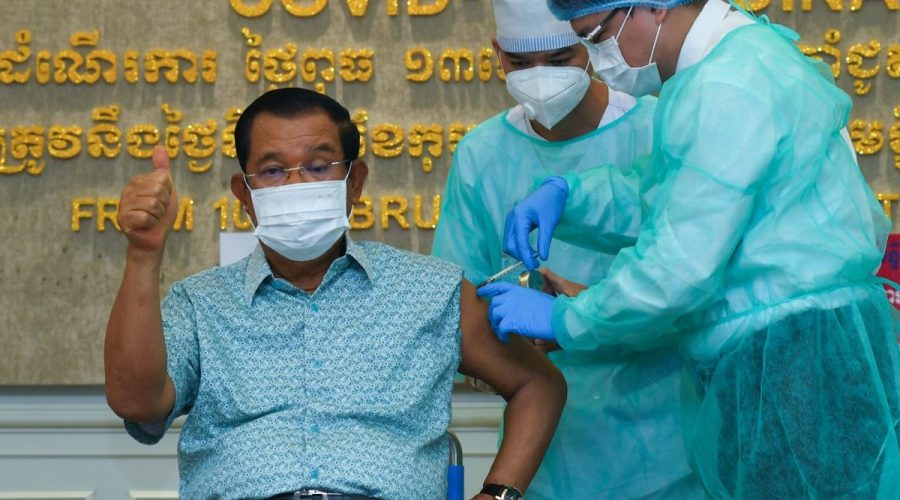 Like every country, Cambodia’s economy as well as society as a whole has been severely affected by the Covid-19 pandemic.

Nonetheless, since last November, Cambodia has reopened the country and started to live with Covid-19, betting on the kingdom’s herd immunity built upon one of the world’s highest vaccination rates.

As of November 28, the country was ranked second in Asia and seventh in the world for the total share of fully and partly vaccinated people in its total population. On December 20, the results of the so-called “February 20 community event” were declared an end after the government had struggled to contain the outbreak nationwide for 10 months.

The world is quite contradictory because the advanced economies have a surplus of vaccines and yet they are struggling with vaccine hesitancy, while developing countries have been battling for access to vaccines.

Cambodia is among the lucky few developing countries that can secure vaccines for its people, who welcome inoculation as the only means and strategy for national reopening up. The World Health Organization attested to Cambodia’s vaccine success in that regard, but also warned of “vaccine optimism.”

As of November, 87.7% of the population of about 16 million had been fully vaccinated, and Covid-19 has been under control with fewer than 3,000 deaths.

On top of public health measures, robust fiscal, economic and social-security measures have been pursued to prevent the full-scale fallout of the economy and people’s livelihoods. In December, the government laid out 10 rounds of intervention measures to support survival and recovery of micro, small and medium enterprises and sectors most affected, namely garment and tourism, and to provide minimum basic needs for 700,000 vulnerable households.

According to the Ministry of Economy and Finance (MEF), $829 million was spent for interventions in 2020, and $1.454 billion in 2021. For the national budget in 2022, under the “3Rs” pillars (“Recovery, Reforms, Resilience”), the government has earmarked $1.014 billion for intervention, making the total expense since 2020 amount to approximately $3.4 billion.

The MEF predicted growth for 2021 at 3.0% and 5.6% for 2022, expecting the economy gradually to reach its potential in the medium term, supported by global demand and a gradual recovery in investment confidence.

For 2022, three trends should be key for observation on development of Cambodia’s economy.

The first thing to watch is how well Cambodia can tap the benefits from the success of the inoculation drive.

Despite strong efforts to reopen the country and economy, tourists and investors are not yet ready to come back. The strength of the vaccination program offers assurance that Cambodia’s production capacity and preparedness of working people are intact.

Indeed, people’s cross-border mobility is still restricted, but the flow of goods is on the uptick and therefore contributing to growth of trade.

Second, attention should be paid to the quiet but steady progress of public investment and reforms.

This is about turning crisis into opportunities. The pandemic has been turned around as a stimulus for domestic reforms to build more resilience, for robust infrastructure investment, and for formulations of various long-term policies.

On the issue of reform, the long-awaited updated investment law was promulgated on October 15, 2021. The revised law provides better business facilitation and more tailor-made incentives, and encourages investors to focus on priority areas that promote industrial diversification, as well as encouraging provision of support for capacity-building and welfare of workers.

In terms of infrastructure development, when tourist figures were at rock bottom, the government built and renovated 34 roads spanning 84 kilometers in Preah Sihanouk province, at a cost of $294 million. A similar project was conducted in Siem Reap province, with 38 roads of more than 106km, costing $149.21 million. These two major projects were completed.

Infrastructure mega-projects such as Siem Reap International Airport (slated for completion by 2023), new Phnom Penh International airport (26% complete as of November 2021) and Cambodia’s first ever expressway running from Phnom Penh to Sihanoukville (progress 70% as of December 2021) are ongoing steadily.

When Laos inaugurated its high-speed railway last year, Cambodia remained the last country in the Mekong region without a properly functional freight and passenger railway.

During Covid-19 hibernation, some long-term policies were developed and/or adopted last year.

For instance, in October, the MEF contracted a Shenzhen-based Chinese institute for the development of a master plan that seeks to transform Preah Sihanouk province into a “multi-purpose special economic zone,” modeled after the success of Shenzhen city as part of the implementation of the Industrial Development Policy 2015-2025 of Cambodia.

In a similar vein, the Ministry of Land Management, Urban Planning and Construction has officially approved the Sihanoukville Land Use Master Plan, or Vision 2038, to provide a framework and direction for the effective management and development of Sihanoukville City.

Apart from the great attention paid to the buzzing Sihanoukville City, the government also approved the draft Mondulkiri Tourism Development Master Plan 2021-2035 as a comprehensive initiative to attract 3 million domestic and international tourists annually to the northeast region’s eco-tourism and biodiversity gem of Cambodia by 2035.

If well developed, the master plan will turn the northwestern province of Mondulkiri into another major economic pillar of Cambodia, apart from Phnom Penh, Siem Reap and Sihanoukville.

In May 2021, the government also adopted the “Cambodia Digital Economy and Society Policy Framework 2021-2035” that sets out a long-term vision to build a vibrant digital economy and society by laying the foundations for digital adoption and transformation in all sectors of society.

The above are some of the major master plans and long-term policies that have been recently adopted as Cambodia is trying to rebuild a more resilient recovery and society.

It is worth noticing that in recent years the non-garment sector has been on a growth trajectory. The garment sector used to play a leading role in the economy of Cambodia, accounting for 74% of total merchandise exports in 2018. Despite the accelerated growth rate of 6.8%, garment exports no longer account for the majority of goods exports but rather 45.9% of the total, amounting to $5.82 billion during the first nine months of 2021.

The fifth- and sixth-largest exported products are agricultural commodities, and milled rice and rubber, amounting to $285 million and $266 million respectively. The newly emerging manufactured products, which include electrical, electronic, vehicle parts, and cables combined, reached $412 million.

While the US and the European Union continue to be the largest destinations for Cambodia’s merchandise export, various free-trade agreements that have been adopted recently, namely the Regional Comprehensive Economic Partnership (RCEP), and FTAs with China and South Korea, are expected to open up more market horizon for Cambodia’s products.

Cambodia is negotiating with China to allow more import of diversified agricultural produce, especially items that Cambodia has strong capacity to produce and meet with high focus on quality from China’s consumption market.

With Cambodia’s geographically strategic location right in the heart of Southeast Asia, Japanese retailer Aeon has recently chosen the kingdom to develop its logistics hub within the region. The plan is to build a roughly 3-hectare logistics center in Sihanoukville, offering import storage, customs clearance and support for cross-border online retail.

This will become Cambodia’s first bonded warehouse as the government has plans to develop a free-trade port, with backing from the Japanese government and the Japan International Cooperation Agency.

Cambodia is also preparing for the next major economic transformation as it is expected to graduate from least developed country (LDC) status in the next several years. After graduating from the LDC category, Cambodia is expected to no longer benefit from LDC-specific international support measures.

One of the main support measures for LDCs is preferential access to developed economies’ markets under the Generalized System of Preferences (GSP), including the EU’s “Everything But Arms.”

Cambodia is conducting consultative meetings with various stakeholders to develop its own “National Smooth Transition Strategy.” Among others, apart from cultivating new market destinations, Cambodia is studying preference erosion and is preparing itself for negotiation of GSP Plus to maintain market, stability of production, and investment attractiveness.

Sim Vireak is a strategic adviser to the Asian Vision Institute based in Phnom Penh. He has written articles on a variety of topics pertaining to Cambodia’s political economy, development and foreign affairs. The views expressed are his own and do not represent those of his affiliation. More by Sim Vireak