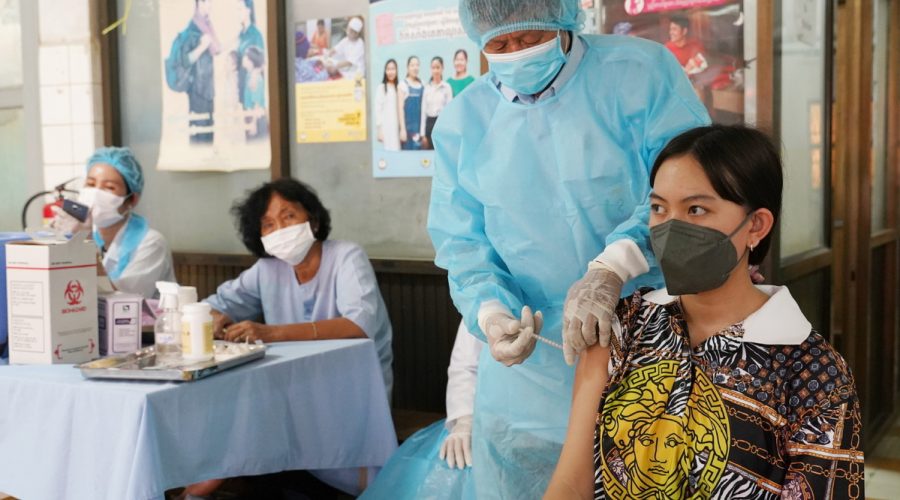 Cambodia is tracking well ahead of the pace it has set for COVID-19 vaccinations and now boasts one of the highest coverage rates in Southeast Asia.

The country set a target of vaccinating 10 million adults by the end of the year. By Monday, the program had covered 87.68 percent of the target population, data from the Health Ministry shows.

The vaccination rollout puts Cambodia among those with the highest vaccination rates in the region and well above the world’s average of 33 percent.

“The rollout has been remarkable for a country at Cambodia’s level of development,” said Stephen Higgins, managing partner of consulting firm Mekong Strategic Partners, adding that the country’s vaccination rate is also among the best globally.

Higgins said the key reasons behind Cambodia’s vaccination success include the ability to source sufficient vaccines from multiple sources, a simple geography-based rather than age-based rollout program, and a holistic approach supported by the government as well as the military.

In a report published on Aug 16, the consultancy projected that Cambodia will fully vaccinate 70 percent of its entire population by September, up to a year ahead of its neighbors.

In contrast, the Philippines is expected to reach the same level of vaccination by March next year, and Vietnam is forecast to complete its rollout by September 2022.

“Cambodia realized early on that the best vaccine is the one that you can actually get,” said Higgins, noting that Chinese vaccines like the ones from Sinovac Biotech and Sinopharm have played a key role in getting Cambodians protected.

Cambodia launched its vaccination campaign on Feb 10 after receiving a batch of 600,000 vaccine doses donated by China, the first country to provide vaccine donations and commercial procurement arrangements for the country.

Chheang Vannarith, president of Asian Vision Institute, a think tank in Phnom Penh, said Cambodia has been engaging with several partners, especially China, on vaccine procurement. The people are well-informed about the importance of getting vaccinated, so there was no resistance against vaccination, he said.